Hey, this is Heather from the Renaissance English History Podcast, and this is your Tudor Minute for August 20.

Today in 1588 a special service of thanksgiving for the defeat of the Spanish Armada was held at St. Paul’s. The Spanish fleet had been pretty much destroyed, while only about 100 Englishmen had lost their lives in the fighting. The defeat was largely down to the weather, what was called the Protestant Winds. Philip II supposedly said, “I sent you out to war with men, not wind and waves,” when he heard about the way the Armada was defeated. The English believed that this was down to God being on their side, and Elizabeth had a special medal struck to mark the event, which said, “Flavit Jehovah et Dissipati Sunt,” – God Blew and they were Scattered.

That’s your Tudor Minute for today. Remember you can dive deeper into life in 16th century England through the Renaissance English History Podcast at englandcast.com where there are several episodes on the Spanish Armada. 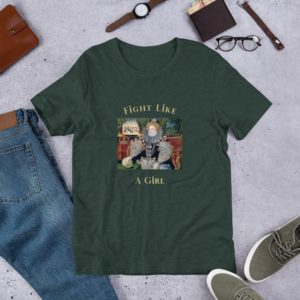 The Spanish Armada Part I: A 30 Year Road to Battle

From the Shop: Fight like a Girl T-Shirt featuring Elizabeth I’s famous Armada Portrait – Save 15% today with code GIRLPOWER