** Have you checked out TudorFair.com lately? My online shop, filled with Tudor gifts, is celebrating its one year anniversary this week. Use the code 25OFF75 to take $25 off any order of $75 or more, just this week only. This Tudor Love shirt has been popular! 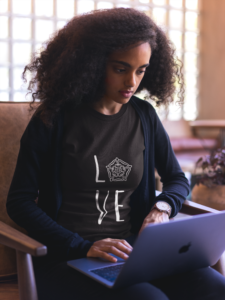 Hey, this is Heather from the Renaissance English History Podcast, and this is your Tudor Minute for September 24.

Today in 1586 Arthur Tudor was christened. Prince Arthur, Henry VIII’s older brother, was christened at Winchester Cathedral. Of course Henry VII had planned his birth to be there – he was, after all, named after King Arthur, whose legendary round table is still at Winchester even to this day.

This was a huge time for Henry and his wife, Elizabeth of York. After decades of civil war, we finally have an heir, the fruit of the union between Lancaster and York. Elizabeth’s family were to be major participants in the service, showing that this union was successful, and everyone was getting along.

Henry VII had planned that Arthur’s godfather would be the Earl of Oxford, John de Vere, and he needed time to travel from Suffolk. Elizabeth Woodville, the godmother, waited at the cathedral, while the rest of the family gathered in the Queen’s apartments. Oxford hadn’t arrived, and so Henry asked Thomas Stanley, Lady Margaret Beaufort’s husband, to stand in. Oxford finally arrived, just after his naming, and then everyone enjoyed spiced drinks at the shrine of St. Swithun, the saint of Winchester Cathedral, and they sang hymns before returning little Arthur back to his mother.