An introduction to the rebellions that our Tudor monarchs faced. There were five or six general causes that led to rebellion – these were:
– Dynastic – either replacing the Tudors all together (something Henry VII faced) or changing the succession (Mary and Elizabeth both faced these).
– Economic – taxation that one part of the country or another thought was unfair, land enclosures, disruption from famines.
– Religious turmoil – when Henry VIII broke from Rome, and then when Edward kept the Reformation going, only to be followed by Catholic Mary trying to revert things back. 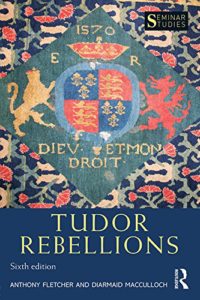