Mary Queen of Scots’ Cipher, and the art of hiding messages

One of the most interesting aspects of Mary Queen of Scots was the relationship with Francis Walsingham, who has gone down in history as Queen Elizabeth’s Spymaster. As Mary tried to communicate with the outside world, she wrote in code so that her messages could not be easily read.

Writing in code dates all the way back to Julius Caesar. His cipher was pretty easy to break, though. All he did was move the entire alphabet over four letters, so that A became D, and B became E, and so on. Once you were able to figure out one word using the cipher (something easy and often repeated, like “the”) everything became clear. 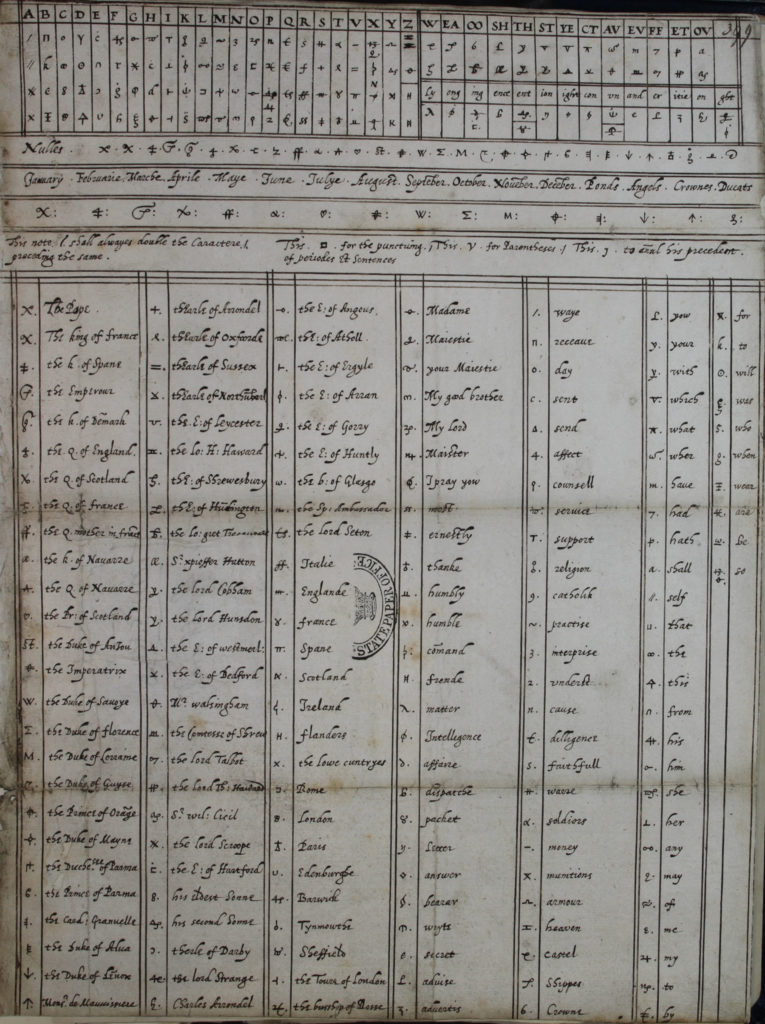 A cipher used by Mary Queen of Scots – look at all the people she mentions – Bess of Hardwick, Walsingham, the Queen… as well as the symbols for each letter of the alphabet. Photo from the National Archives in London.

There are two different aspects of message hiding. The first is stenography (from Greek Steganos – covered – and graphein – to write). This is where people hide the actual message itself. For example, disappearing ink. Even modern spies have used their own urine when they run out of invisible ink! The ancient Greeks would tattoo messages on the scalps of couriers. When those couriers were captured and their heads shaved, the messages would be revealed.

Giovanni Porta, an Italian scientist writing in the 15th century, described how to hide a message in a hard-boiled egg!  You create an ink by mixing one ounce of alum and a pint of vinegar, and then write on the shell. The solution penetrates the porous shell, and leaves a message on the surface of the hardened egg inside. It can only be read once the shell is removed.

The problem with this method is that if something happens to the messenger, and the message is discovered, the entire thing falls apart. Mary needed a way to write letters that would reach their recipients, but if they were intercepted, they would mean nothing at all. And so, she developed a sophisticated cipher. Ciphers are studied in cryptology (not the study of crypts, though that would be interesting, too, but the study of encryption – codes).

Cryptology doesn’t hide the existence of a message. It makes the message meaningless to an enemy who intercepts the message.  To do this, they scramble the message in a way that is agreed upon between the sender and the recipient. When the recipient has the message, they can decipher it according to a key.

Mary used both ways to communicate with her supporters.

Mary came up with a sophisticated cipher system – a system called substitution. This is also the type of encryption we use online – though it’s much more complicated! That means that she would replace letters for symbols according to a pattern. She would change it regularly, using symbols to represent letters, as well as symbols that represented often-used words – like Walsingham himself, or the Pope, Elizabeth, and even Bess of Hardwick!

The stenography part came in as the messages were hidden in the beer barrels. As the beer came in and out of the home, they carried her messages with them.

When Walsingham’s men searched Mary’s apartments, they found over 100 ciphers!

Thomas Phelippes, a cryptologer and linguist, led the team who deciphered Mary’s letters. As a linguist, he understood how languages work, and was able to figure out the repeated letters. Phelippes was busy with a lot of day-to-day work for Elizabeth, and had a huge backlog of work. Walsingham had to wait nearly seven months to have the letter that would show that Mary was complicit. Phelippes drew a gallows on the letter before he passed it on to Walsingham. He knew that he had just deciphered the letter that would seal Mary’s fate.