Sudio Headphone Review (aka, I won’t be an affiliate for them)

The Agora Podcast Network, of which I am a proud member, recently reached an affiliate agreement with Swedish headphone manufacturer Sudio, whereby podcasters who so desired could advertise the headphones with a special affiliate link, and receive a commission on all sales purchased through our link. As I love nothing more than a great pair of headphones, I was intrigued. But as I also will only recommend things that I actually, you know, recommend, I was anxious to get my sample pair before marketing them on my show.

So I’ve been using my Sudio Regent headphones for about a month now, and I wanted to take some time to write out my thoughts before deciding whether to actually push them on my show.

They retail for €89, which is about $110 depending on the exchange rate. 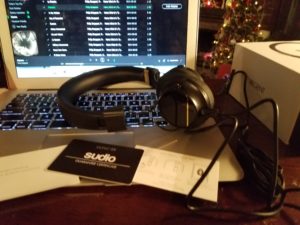 First I’ll give you my overall grade, and then tell you why I rate them the way I do, and what I’ve been comparing them to.

Overall Score for Sudio Regent Headphones:
B- but with a caveat that that’s for music.
For spoken word, I’d rank them A+.

First Impressions
When you unbox the Sudio Regent you see the headphones which fold cleverly (point for design there), warranty information, cords, and a booklet about the headphones themselves. They are apparently named in homage to Phil Collins because one of the founders once saw Phil on the street fumbling with his headset cord, and they shared a knowing look about how it should be so much easier, and better.

That’s a great story, but the first thing I noticed when I was unboxing them was that there’s no travel bag. If I pay over $100 for a pair of headphones, I’d expect them to have some kind of a bag, or case, or something to store them in, along with their cords, and carry them with in my purse. Point taken off for not thinking ahead like that.

The cords include a charging cord, and one to connect to your device when you’re not connected with bluetooth. There are three buttons on the right side of the set, easy for your thumb to reach. They are volume – low and high – as well as the bluetooth connection button. 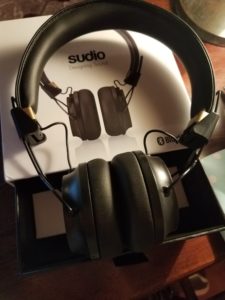 I easily connected to my laptop, but I have to say that since then it’s been wonky. Disconnecting from one device (laptop) and changing to another (phone) isn’t very easy. But I have to say, I have issues with this in speakers too. I have a Bose bluetooth speaker that seems to only be able to connect to one device ever. But I have a Sony speaker that I can switch from my Echo Dot to my phone really easily. I have no idea what the technology and settings are with those two speakers, and why one should be different than another. But it’s how it is in my life, so who knows.

So I connected to my laptop, and pulled up the Spotify playlist to test headphones with. It’s a cool playlist with a mix of eclectic music and sounds, and I enjoy it as it gives you all the dynamics and range of the headphones. I could certainly hear the quality with these, but beyond that I wasn’t really sure I heard much of a difference with the simple noises in the opening song on that playlist, so I switched over to choral music.

I should say, I am by no means an audiophile. I’m not one of those people with a giant stereo hookup, who is really concerned about every teeny tiny sound. Anyone who listens to my podcast will know that I’m not the world’s greatest editor, and I often ask my listeners to listen in sub-optimal conditions. 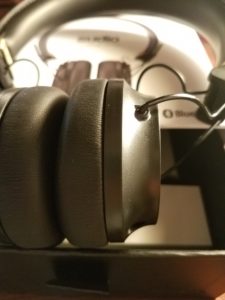 There’s simply not enough bass. My choral music sounded almost tinny. I thought it was just a choral thing, and maybe they just didn’t like Tallis, and so I pulled up some Ed Sheeran. The opening beats to Castle on the Hill are weak, and I kept wanting to turn up the volume, or do something to help the poor struggling bass. It’s pretty much just missing. I don’t want it to bang, like I’m hanging out in some low rider in Echo Park, but I do want the opening pulse to be audible. This one felt like it was on life support.

I have never thought of myself as a bass person. Maybe it’s because the main time I’m listening to music with headphones these days is when I’m at the gym on the treadmill, and I want that beat to keep me going. I don’t know. All I know is it sounds like a teeny tiny synthesizer like my daughter has made this sound, and I don’t like it.

So I don’t like the result with these headphones, but I want to say that I actually think they might be pretty great if you are listening for spoken word. I changed over and listened to an NPR show, and it was seriously like I could hear Scott Simon’s every mouth noise. I’ve never felt so close to someone when listening to their voice. It was almost creepy.

I should also say that after an hour, they did squish my face a bit and make my ears hurt. At first I thought it was because of my earrings, or my glasses, but once I took both off on another day, it was still there.

What I’ve been comparing them to:

I first discovered how much better my music can sound in 2007 when I got a pair of SkullCandy headphones. It rocked my world to blast my music with great sounding headphones, suddenly be in my own world immersed in the music, and likely give myself hearing loss at the time. It was an amazing experience.  Since then I’ve had headphones by Sennheiser, Bose, and the regular pair I use at the gym now is an 8 year old pair of earbuds from Ultimate Ears. I enjoy my music way more with all of these than I do with the Sudio ones.

But like I said, I’m pretty sure that they are amazing for spoken words. And if you listen to a lot of podcasts with headphones, then these might be the most amazing things for you.

So, my final verdict – if you listen to a lot of spoken word, then you will probably love these. If you’re buying only for music, then you likely won’t. Check out the return policy, and give them a try if you’re on the fence. Oh, wait, when I click on “return and refund” on their site, you’re taken to a page offering a free armband with any purchase of the Tre buds, and also their instagram feed. So yeah, never mind on the whole return and refund thing. I’m sure they have a return policy, but I have no idea what it might be. And neither will you if you rely on their site.

That’s just a simple editing thing, and they can fix it. The tinny sound of my music? Not so fixable.

Also, my husband loves them.
So clearly this isn’t a Truth-with-a-capital-T review.
This is just my opinion.

And thanks, Sudio, for sending the headphones, and being open to feedback. I like the design. I actually really like the design. But there are some simple fixes you need to make (ie the travel bag and the return policy link on your site which is fixable in five minutes), and as for the sound, hey, I’m just one person, and who knows. I could be totally wrong. Maybe for your target market these are amazing. I wouldn’t doubt it. They just aren’t my jam.