Today in 1600 Sir Thomas Lucy was buried in Warwickshire. He was a magistrate and Member of Parliament, but he is best known as a Shakespearian Villain. Lucy was a prominent Protestant reformer. In fact John Foxe, who is famous for his book of Martyrs, was a tutor in Lucy’s household in the 1540’s. Lucy was active in the persecution of Catholics under Elizabeth, and that brought him into conflict with some of Shakespeare’s Catholic relatives. The most famous story, though, is that Shakespeare may have been poaching on Lucy’s estate.

Shakespeare is sometimes thought to have satirized Lucy with the character of Justice Shallow, who appears in Henry IV, Part 2 and The Merry Wives of Windsor.

And then there is That Ballad, which was first written down 100 years after Shakespeare would have written it. There’s no evidence either way, but it’s a clever piece of poetry:

A parliament member, a justice of peace,
At home a poor scarecrow, at London an ass,
If lousy is Lucy as some folks miscall it
Then Lucy is lousy whatever befall it.

Thomas Lucy, who is probably rolling over in his grave somewhere for being remembered only for this incident in Shakespeare’s life, buried today in 1600.

That’s your Tudor Minute for today. Remember you can dive deeper into life in 16th century England, through the Renaissance English History Podcast at englandcast.com where there are several episodes on Shakespeare and the Elizabethan Theater. 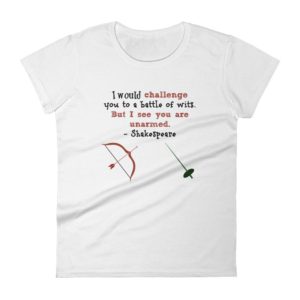 The Theater Part III: The Other Major Players Who Aren't Named Shakespeare

From the shop: "I would challenge you to a battle of wits, but I see you are unarmed" tshirt. Buy it at TudorFair.com