Hey, this is Heather from the Renaissance English History Podcast, and this is your Tudor Minute for July 24.

Today in 1567, while imprisoned at Lochleven Castle in Scotland, Mary Queen of Scots is forced to abdicate in favor of her one year old son, who became King James VI of Scotland (and even later, King James I of England).

Mary became the Queen of Scots when she was just 6 days old and her father, King James V, died. Her mother negotiated a French marriage, and she was raised at the French court, marrying the French dauphin who became King Francis II. He died after just a year, and Mary returned home to Scotland. But she hadn’t expected the politics of Scotland. She married her English cousin Lord Darnley, and then he was mysteriously killed.

Mary then quickly remarried the chief suspect in his killing, and while historians disagree on whether she was forced into this marriage by the said Earl of Bothwell (I think she was), there can be no disagreement as to the PR nightmare that it became. Bothwell was acquitted of the charge, but the nobility had had it. Mary was forced to abdicate today. A year later she would escape and flee to England where she hoped to receive help from her cousin, Queen Elizabeth. That, of course, is a different story. 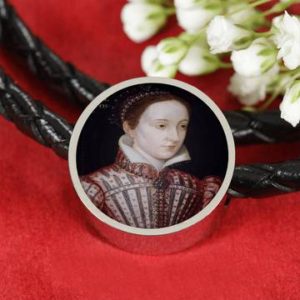 From the Shop:
The Mary Queen of Scots collection - save 15% off the collection today with code MQS