Tudor Minute May 1: The Evil May Day Riots

Today in 1517 we saw the Evil May Day Riots. Two weeks previously a Dr Bell preached a sermon against immigrants who were coming to England to take the jobs of native born Englishmen, and encouraged people to attack foreigners. During the May Day of 1517 apprentices were joined by Thames waterman, and city porters, and they ran wild in London attacking foreigners in their homes and shops. Most of these foreigners were French, but there were also attacks on Jews and the Dutch.

Thomas More managed to calm everything down, and within the next few days over 300 people were arrested, and a few dozen of the leaders were hung, drawn, and quartered.   This is also the scene of a recent discovery of a play about Thomas More that Shakespeare helped write, with these famous lines, which I am going to read because we are still in the midst of the greatest refugee crisis in the world since the second world war, and sometimes we need some Shakespeare to remind us to practice empathy.

Grant them removed, and grant that this your noise
Hath chid down all the majesty of England;
Imagine that you see the wretched strangers,
Their babies at their backs and their poor luggage,
Plodding to the ports and coasts for transportation,
And that you sit as kings in your desires,
Authority quite silent by your brawl,
And you in ruff of your opinions clothed;
What had you got? I’ll tell you: you had taught
How insolence and strong hand should prevail,
How order should be quelled; and by this pattern
Not one of you should live an aged man,
For other ruffians, as their fancies wrought,
With self same hand, self reasons, and self right,
Would shark on you, and men like ravenous fishes
Would feed on one another….
Say now the king
Should so much come too short of your great trespass
As but to banish you, whither would you go?
What country, by the nature of your error,
Should give you harbour? go you to France or Flanders,
To any German province, to Spain or Portugal,
Nay, any where that not adheres to England,
Why, you must needs be strangers: would you be pleased
To find a nation of such barbarous temper,
That, breaking out in hideous violence,
Would not afford you an abode on earth,
Whet their detested knives against your throats,
Spurn you like dogs, and like as if that
God Owed not nor made not you, nor that the elements
Were not all appropriate to your comforts,
But chartered unto them, what would you think To be thus used?
this is the strangers case; And this your mountainish inhumanity. 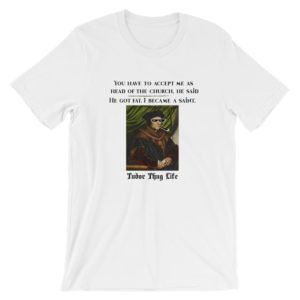 And if you are called to help refugees and strangers today, I urge you to go to helprefugees.org where you can make a donation to a charity that is working with displaced people.
Links: Episode 57 on xenophobia in Tudor England https://www.englandcast.com/2016/10/episode-57-strangers-in-our-midst/