Tudor Minute May 14: The Creeping Parliament

Today in 1571 Scotland saw the Creeping Parliament. This was part of the civil war that consumed Scotland after Mary Queen of Scots abdicated, and her son was still very young.

After James Hamilton, who supported Mary, killed Regent Moray in 1570, Elizabeth I sent an army north to Scotland to help sort out the mess. Elizabeth helped James’ grandfather, the Earl of Lennox (Darnley’s father) to gain control and rule the country. He was at odds with nearly half the country who still supported Mary, and today Lenox held his Parliament in Edinburgh, called the Creeping Parliament, because the attendants had to creep past the supporters of Mary. The Queen’s supporters had captured the castle, and were shooting at anyone who tried to go in.

At the same time, Mary’s supporters had their own parliament in Edinburgh where they were trying to restore her to the throne. Both parliaments adjourned until a later date, and Scotland continued to fight over who would rule for several more years.

That’s your Tudor Minute for today. Remember you can dive deeper into life in 16th century England through the Renaissance English History Podcast at englandcast.com where there is an episode on Mary Queen of Scots, and James I. 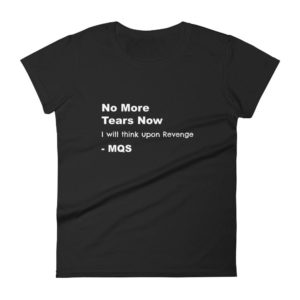 From the Shop:
The Mary Queen of Scots "No More Tears Now" quote shirt