Tudor Minute May 8: Elizabeth Signs the Act of Uniformity

Today in 1559 Elizabeth I signed the Act of Uniformity. This was part of the Elizabethan religious settlement and compromise which left no one fully happy - a sign of a good compromise if there ever was one.

The Act of Uniformity set out the order of prayer to be used in the English Book of Common Prayer, and it also stipulated that all people had to go to the English church once a week or be fined 12 pence, which is the equivalent to roughly about £11 in 2007 money - this was a large amount for the poor, just as it would be today.

After the act passed 14 bishops were let go, leaving their spots vacant. Matthew Parker was appointed as the new Archbishop of Canterbury as well.

The other major act that was part of the Elizabethan Settlement was the Act of Supremacy that confirmed Elizabeth as the Head of the Church of England.

That’s your Tudor Minute for today. Remember you can dive deeper into life in 16th century England through the Renaissance English History Podcast at englandcast.com where there is a series of episodes on the English Reformation. 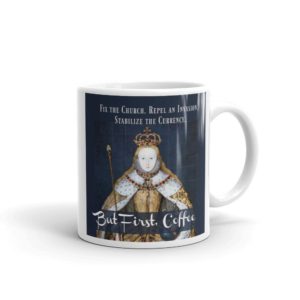 From the Shop:
Elizabeth I But First Coffee Mug
https://tudorfair.com/products/elizabeth-i-but-first-coffee-mug