Hey, this is Heather from the Renaissance English History Podcast, and this is your Tudor Minute for September 12.

Today in 1555 Archbishop Thomas Cranmer went on trial for heresy. He was one of the architects of Henry VIII’s divorce from Catherine of Aragon, and as such when Mary Tudor came to power, Catherine’s daughter, he was one of the main people that she had a grudge against. And so today, at the University Church of St Mary the Virgin at Oxford, Cranmer entered the court, having been accused of denying papal authority, and denying transubstantiation. Transubstantiation was the belief that the bread and wine literally turned to Christ’s body and blood in Communion, and a main tenant of Protestant belief was that it was symbolic of the bond people had with Christ rather than being literal.

The Bishop of Gloucester represented the Pope in the trial, as it was under Papal jurisdiction since Cranmer was archbishop of Canterbury and had been appointed by the pope. But Cranmer didn’t show any deference to Gloucester, and when he was asked why he responded that he had once taken a vow never to let any papal authority into England, and he wasn’t about to turn back on that now.

The Pope duly stripped him of his titles, and turned him over to the secular authorities to administer their sentence to him – which would be burning at the stake.

Coffee: Because Reformation-ing is Hard mug 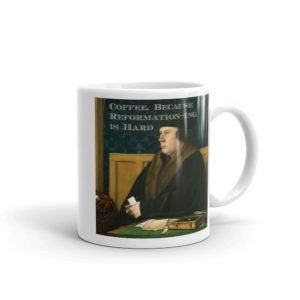