Tudor Music Hour Episode 015: The Music of the Peterhouse Partbooks

The Tudor Music Hour this week (Sundays at 9am UK Time, available on Mad Wasp Radio, on TuneIn)  featured the mass by Robert Jones, from the Peterhouse Partbooks, recorded by Blue Heron.

The Peterhouse Partbooks are an extraordinary example of English polyphonic music from the mid 16th century, just as the Disillusionment of the Monasteries was reaching its zenith. Copied by a scribe at Magdalen College for use at the newly refounded (as a secular Cathedral) Canterbury Cathedral, the music features over 50 pieces that are only available in these books.

They differ from the Eton Choirbook, which I featured on my show back on Episode 6, because (in addition to about 40 years separating them) Eton is one large choirbook with all of the parts. The choir would stand around it. The Peterhouse Partbooks are individual parts. With Eton, if one of the pieces of the books goes missing, the entire piece of music is lost. With Peterhouse, one part did go missing – the Tenor part disappeared in the early 17th century. But because the other parts are still there, it is possible to try to reconstruct, or re-compose the music. This is exactly what Nick Sandon, retired from the University of Exeter, did.

Blue Heron, an ensemble based in Boston, recorded the music in a five CD set over the course of several years. Just this year they were nominated for a Gramophone award for their work in bringing this music back to life.

The Mass I played is by Robert Jones, a largely ignored composer who was a singer in the Royal Household Chapel in the 1510’s and 20’s. This is the only place where this Mass can be found. The Peterhouse Partbooks also feature music by Tallis, Fayrfax, and many of the other greats of this period.

You can listen on the playlist above, or buy the CD’s here (and support the work of Blue Heron): 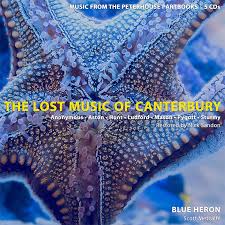 The Complete Five CD Collection
The Lost Music of Canterbury.

Music from the Peterhouse Partbooks: Volume One

Music from the Peterhouse Partbooks: Volume Four (this is the one I used in this episode)